With over 100 successful Years in the construction business

Our clients trust us to do the job right every time.

In August 2020, Gagliarducci Construction, completed the reconstruction of the notorious Six Corner’s intersection in Springfield, MA. The $2.5-million-dollar project involved the creation of a new roundabout; a one-way circle.

In addition, new granite curbing, concrete walks, and stamped concrete pavement was also installed throughout the project’s limits. New site improvements, street lighting, and landscaping topped off the project’s design. Gagliarducci was able to complete the project less than eighteen months from breaking ground, and months ahead of the original project timeline. The venture’s success was in big part due to the effective collaboration between the City, design team, Gagliarducci Construction, and various other stakeholders in the reconstruction project.

The City of Springfield, MA, experienced a massive drainage pipe failure and erosion event on a steep slope, separating a critical city artery from a bordering wetland and stream.

The project consisted of re-grading the one-acre, one-and-a-half to one slope, and installing a 5-foot section of large-diameter riprap and boulders. New drainage structures and pipe were installed at depths to over 17-feet. Once the slope was stabilized and the drainage system was repaired, Dickinson Street was fully reconstructed, including new gravel bases, pavement, concrete sidewalk and guardrail. 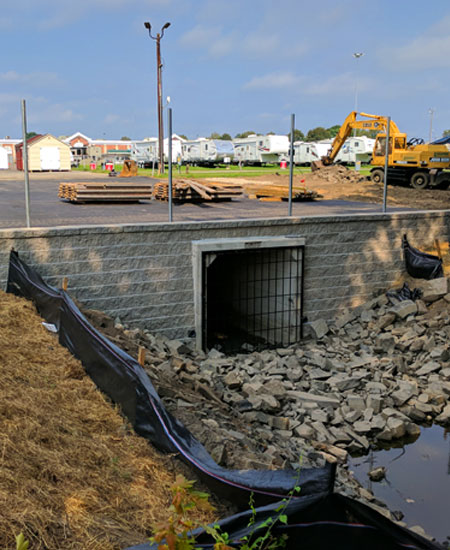 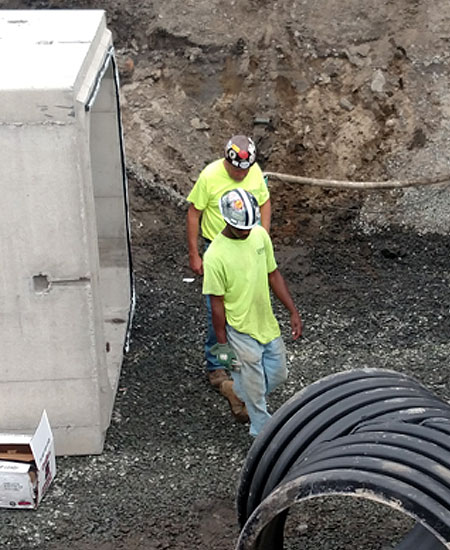 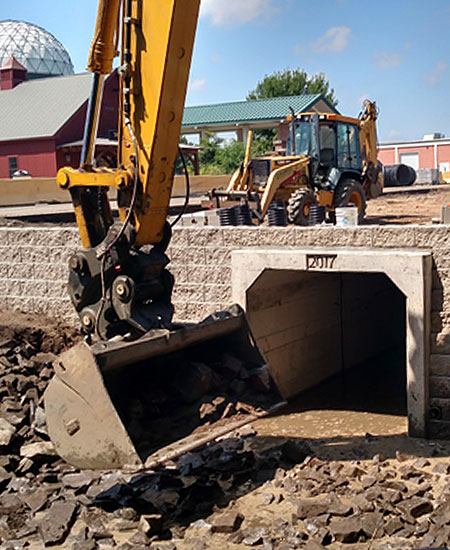 At the Big Eastern States Exposition fairgrounds in West Springfield, MA, Gagliarducci was contracted to extend a drainage channel and pave over it to provide more vendor space for the fair.

A check dam was built and de-watering was performed daily to remove groundwater. Box culverts were used to extend the channel almost 100 feet. A retaining wall was built along the last culvert using Versa-Lok blocks. Sewer, water, and electric utilities were installed before finally paving the area, creating an additional 5,400 sq. ft. of vendor space. 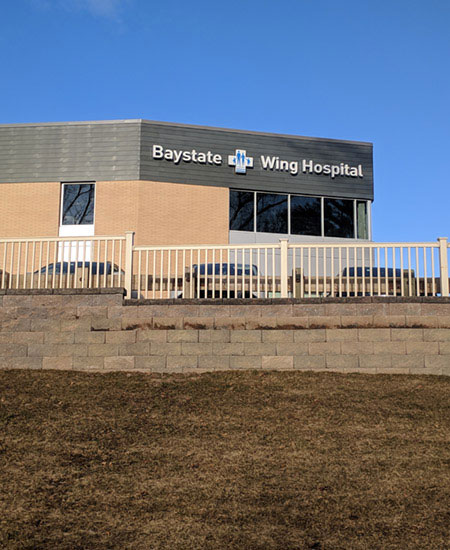 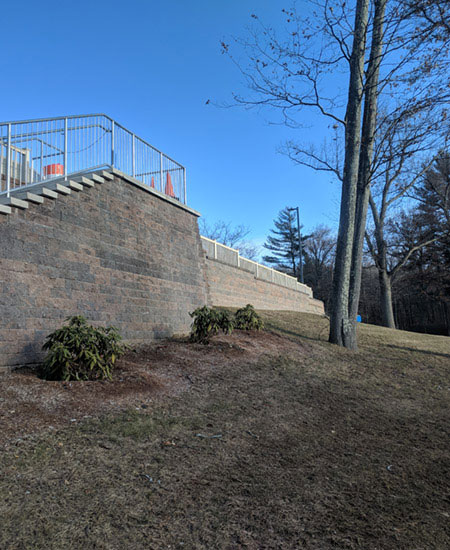 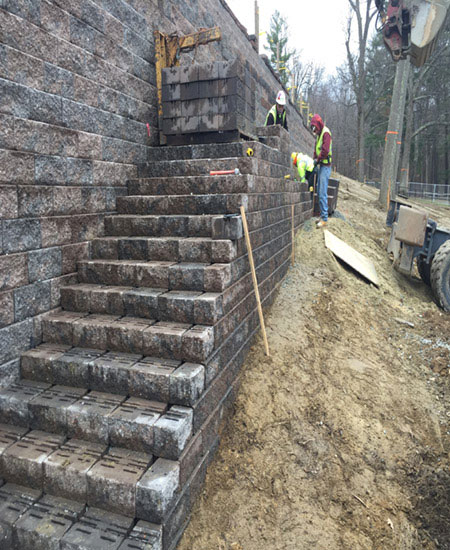 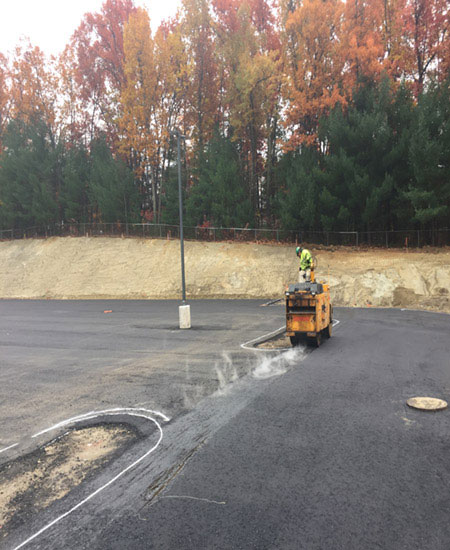 Gagliarducci was contracted to reconstruct the rear parking lot at Baystate Wing Hospital in Palmer, MA. An additional eighty parking spaces were provided by expanding and re-configuring the existing parking lot. A subsurface infiltration system was installed to handle the redesigned storm drainage system. A Versa-Lok block retaining wall was constructed to expand the area of construction.

The larger work area allowed for the hospital’s ring road to be reconstructed around the building addition, thus maintaining traffic flow around the hospital. The patient drop-off area was re-constructed and re-paved, along with additional parking areas. The project was completed with no disruption in hospital services over the time of construction.

Working for the National Park Service and Henry General Contractors in Springfield, MA, Gagliarducci Construction took on all site development for the sewer, drainage, and paving improvement project at the Springfield Armory National Historic Site.

Gagliarducci was responsible for upgrading the on-site parking area for the Armory Visiting Center, as well as major sewer and drainage improvements throughout the site. An approximate 15,000 cubic yard cut-to-fill earthwork project returned the site back to its original pre-Civil War layout. 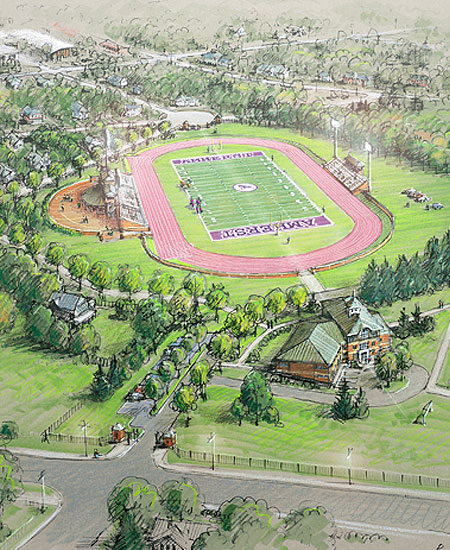 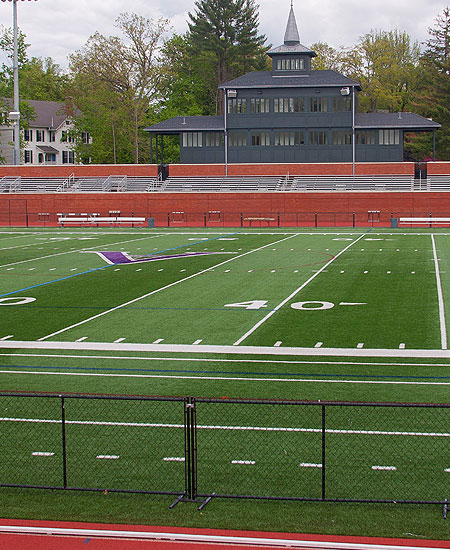 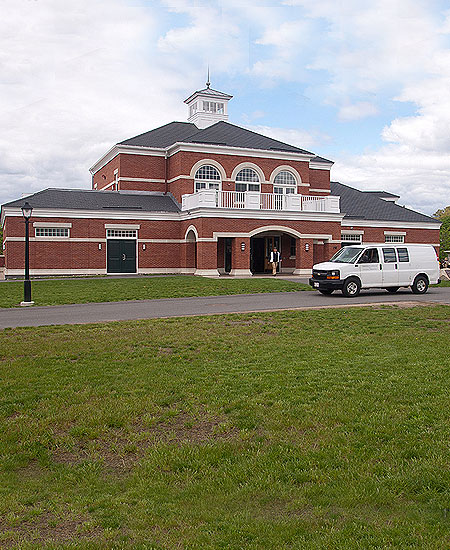 In addition to a full reconstruction of the football field, track, grandstand and press box, a fieldhouse was built at the facility to accommodate a number of collegiate sports teams and athletic personnel. Sewer, water and drainage utilities were installed throughout the project, in addition to the required earthwork and excavations. Gagliarducci was also responsible for asphalt paving and installation of granite curbing. 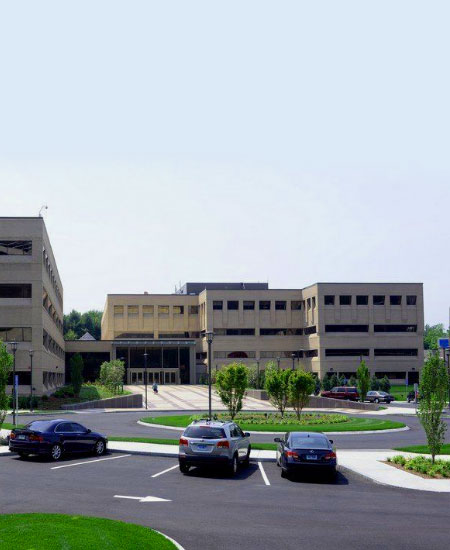 We installed new drainage lines, a new bituminous parking lot, granite curbing and edging, and concrete sidewalks. Landscaping and irrigation was also included under our scope of work. A heated, imprinted, color sidewalk was installed between bluestone-clad site walls, and is the main focal point of the new visitor entrance. Gagliarducci was also contracted directly to rebuild two on-site parking lots, and provide excavation and backfill activities for upgrades to the facility’s electrical and data center systems.